HEART TO GOD,
HANDS TO MEN

Welcome to The Salvation Army in the Slovakia. The Slovakia name is Armáda spásy (literally „Army of Salvation“).

The Armáda spásy is part of The Netherlands, Czech Republic and Slovakia Territory.

If you are looking to contact the Armáda spásy, you are welcome to contact our headquarters at:

If you are visiting the Czech Republic and would like to visit a Salvation Army corps, please look in the Contacts to find the corps in individual cities. The word for corps is „sbor“.

Please note that most of the corps hold their meetings in Czech, with some exceptions. However, you will almost always find someone capable of communicating in English.

The Salvation Army started its work in what was then Czechoslovakia in 1919. Besides spiritual activities, it ran homes for the homeless and other marginalised groups. After it survived the difficult times of German occupation between 1939 and 1945, the new Communist government restricted and eventually completely banned its activities in 1950 and imprisoned a number of its members and officers. The best known of those was Major Josef Korbel whose story is told in the book „In My Enemy’s Camp“.

Shortly after the „Velvet Revolution“ in November 1989, a group of Czech Christians sent a letter to the International Headquarters in Londong, asking The Salvation Army to consider re-starting its work here. The federal Czechoslovak government at the time was also very interested in the Army’s professional and practical experience in dealing with the problems of the homeless. President Václav Havel met with General Eva Burrows and direct contacts were made with the Ministry of Labour and Social Affairs.

The Salvation Army in the Czech Republic was registered by the Ministry of the Interior on 17 May 1990 as a civic association. At the time, it was not possible to register as a church, because the Armáda spásy did not meet the legal requirements for a church registration. After some changes in Czech legislation and complicated administrative preparations, the Armáda spásy was finally registered as a church by the Ministry of Culture in September 2013.

Due to historical connections as well as the closeness of the two languages, the Czech Armáda spásy has been involved in the resumption of activities in Slovakia, which in September 2015 became officially acknowledged as the 127th country The Salvation Army operates in. The name in Slovak is Armáda spásy as well. For more information, see the website of the Slovak Armáda spásy – (only in Slovak). 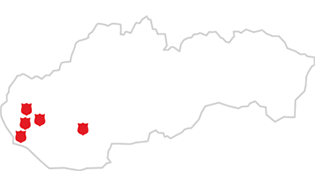